I’ve found out so much about Jehial Stanton but I’ve run into a brick wall with his wife Rebecca Stanton, meaning I don’t have the name of her father or mother. I recently found her obituary, detailed in my last post, and from there I’m going to try to work through this brick wall. Jehial is also still a brick wall but I think I’ve gone as far as I can right now with the information that I have for him.

One of the most interesting pieces of information from the obituary was that at the time of Rebecca’s death, her mother was still alive at 94 years old, but her name is not mentioned in the obituary.

I know that the Stantons moved to the Iowa area from New York around 1847. I know that Rebecca was born in New York to a father from Ireland and a mother from Massachusetts. Unfortunately I couldn’t find anything about their marriage in 1846.

I also don’t know her mother’s name nor where she lived or died, so I think for now this brick wall will have to stay there.

I’ve been focusing lately on my Husted lineage, partially because that’s the most recent research that I’ve been doing and partially because I have a treasure trove of pictures from that side of the family. However, I started my research, maybe two years ago, by following my last name, Dwinells as far back as a could.

You would think that this would be easy because my last name is unique, but because my last name is different, it was spelled so many different ways: Dwinell, Dwinnell, Dwinels, Dwinnells. You get the picture. Some of these variations in spellings are caused by error on the part of the census taker, transcriber or even the part of my ancestors. If they weren’t literate, it might be hard to spell your last name. However some of the variations are due to different parts of the family estranging themselves. I remember by grandmother saying that some parts of the family moved away and changed the spelling of our last name to even further distance themselves from relatives that they didn’t like.

Although this created a lot of confusion for me, I was able to uncover a wealth of information about the Dwinells family that goes as far back in America as the Husteds. While doing my research, I found that there was a book out there about my family genalogy, The True Genealogy of the Dunnel and Dwinnell Family of New England… by Henry Gale Dunnel, written in 1862. (I also want to mention that Internet Archive is amazing). In his introduction, Henry Gale Dunnel writes that he started his research because of the discrepancies between his father’s last, Dunnel, name and the last names of his uncles, Dwinnell.

Henry finds that his ancestor, who also happens to be my ancestor came to Topsfield, Massachusetts in the 17th century. His name was Michael and his last name varied. You can see on the genealogy that I posted, how many different spellings of his last name there are. There is some more information about Michael that I will talk about in a later post. Michael is my eight-times great-grandfather and when I discovered him, as with most of my discoveries, I was amazed. I knew the name of my eight-times great-grandfather. I knew where he lived and some of what he did. For me, that’s a big deal.

To lay the ground work for the Dwinells side of my family, I made a quick tree: 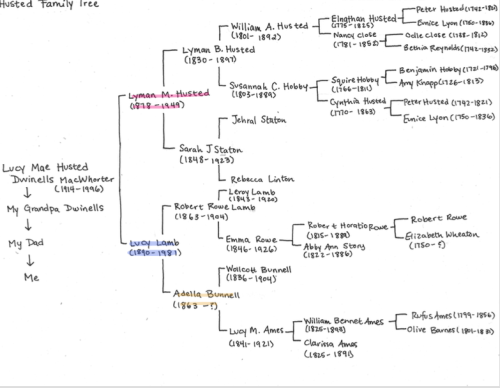 I thought that this letter was really fun to read and gave a good glimpse of like back in 1923. Here’s a scan of the letter, I will transcribe it below.

Dear Mother – You wonder why Lucy dont write because she is doing Mort work in the garden The potatoes are up enough so the beans squash and other things are most in, Yes the early potatoes are rakes and the late potatoes as far as we have planted,

The car runs allright Frank says now you are out with your mother dont be in a hurry to come back he said he would help you here all he could but had a lot fo work to do, You have the fraim and saddle from Earnest England wheel they want $ 2. & told Robert they had the wheels ***** if you take it. Louise went from where mother sit when she was here out in the kitchen, Frances Vanderkruik can ride Marie wheel & robert think thinks he ou ght to have one,

The vegatables are up, We dont get any rain its is thundren now but the most of the rain went over just A little The black berries are in blossom some of them, Mays report card is a little better this time

Mr Brennen wanted to know how mother was * when is mMr Husted coming home,

DO you feel any better out there in that different air, Dave Gregory went to work since Red moved O Frank had a spill turning a round a car down in from front of the store when he came up & hurt his leg havnt seen him since. Robert made a wind mill & put it on the post the same as he had the other one

Mort here Hope you will get along alright I have written most of this to Mort but you dont care if he reads it to you doyou? May has said more then once I wish I would be out there with Daddy. Now I have said more then Mort We are all well & tired.

P.S. Mr Gill came tonight saying if you wanted old house lumber they are tearing down the houses on North Ave and Warren St.

I know that “May” in the letter is my great grandmother, she would have been around 9 years-old at the time of this letter. I’m glad that her grades got better. “Robert” is my great great uncle, “May’s” brother. I’m not sure if “Mort” wrote this letter as Lucy dictated it. That would make the change in tenses more explainable. I also think that Mort is delivering the letter to Lucy’s mother, because she asks Mort to read the letter to her. I don’t know when Adella Bunnell Lamb died but perhaps she moved away from her family at this time, possibly with another one of her children, because Lucy asks her how she is feeling in the “different air”.

Hopefully as I post more pictures from my great grandmother’s box, I’ll be able to link those to the people mentioned in this letter.