Most of this information in this post comes from The True Genealogy of the Dunnel and Dwinnell Family of New England…, by Henry Gale Dunnel (I have no idea why this is an ellipsis on at the end of the title). While you can look at this book online, you can also order it from Amazon, which I did so that I could show people the book that was written about my ancestors.

So who was Michael D-? This was Michael Dunnel, Doniel, Donell, Dunwell, Dwenell, Duenell, Doenell or Dwinill. It was noted that Michael did not usually spell his name, instead affixing his seal to legal documents. Believe or not there are some legal documents that mention Michael, but lets start from the beginning.

Based on an American Genealogical-Biographical Index (AGBI) with is a large database of names that have been printed in genealogies, searchable on ancestry.com, Michael was born in 1640, in Massachusetts, which I feel like is slightly wrong information. Michael was probably born in 1640 but not in Massachusetts where he lived earlier. Henry Gale Dunnel writes that there’s some family historical discussion about the origins of the family, whether it is France or Ireland. Growing up I heard the same thing, the gist of the story was that my ancestor was French nobility who fled France and moved to Scotland or Ireland, changed the name a little, then moved to America and changed the name a little. I’m not sure how much of this true, I haven’t branched my research out into Europe yet.

Michael was married by 1668 to Mary Read in Massachusetts, so he was in America by that time. They had their first child Mary that same year. They had their second child, Michael in 1670, he would go on to be the first doctor in Topsfield, Massachusetts. In 1672, Michael and Mary had another child Thomas, and Michael bought ten acres of land from the Pabody’s. Mary and Michael had a lot of children, besides Mary, Michael and Thomas they had, John in 1674, Elizabeth in 1677, Maudlin in 1679, Joseph in 1682, Susannah in 1685 and Johanna in 1688. Joseph born in 1682 is my direct descendent.

Michael also had a will, in which he gave his sons parts of his land. He ordered (his words) John and Joseph to keep “Two cows, a horse and ten sheep” for Mary Read. It also says that Joseph will have no power to sell the land he was given without the agreement of his mother or counsel. It seems that John and Joseph were to split Michael’s homestead with their mother.

Michael’s will was “proved” on March 3, 1717, meaning he died around that time, either in 1717 or 1716. Mary, his wife and his sons, Michael, Thomas, John and Joseph, all signed that they were present when the will was presented. Even though they signed one after the other, the spellings of their last names differ between Dunnel, Dunnil and Dunnill.

Michael was a farmer, and the land he had served such a purpose. When The True Genealogy of the Dunnel and Dwinnell Family of New England… was written in 1862, the author remarked that this land was still being tended by Michael’s descendants, I wonder if that is still true today. This is about all the information I know about Michael for now. Maybe as I do more digging, I’ll find more stories about him.

I’ve been focusing lately on my Husted lineage, partially because that’s the most recent research that I’ve been doing and partially because I have a treasure trove of pictures from that side of the family. However, I started my research, maybe two years ago, by following my last name, Dwinells as far back as a could.

You would think that this would be easy because my last name is unique, but because my last name is different, it was spelled so many different ways: Dwinell, Dwinnell, Dwinels, Dwinnells. You get the picture. Some of these variations in spellings are caused by error on the part of the census taker, transcriber or even the part of my ancestors. If they weren’t literate, it might be hard to spell your last name. However some of the variations are due to different parts of the family estranging themselves. I remember by grandmother saying that some parts of the family moved away and changed the spelling of our last name to even further distance themselves from relatives that they didn’t like.

Although this created a lot of confusion for me, I was able to uncover a wealth of information about the Dwinells family that goes as far back in America as the Husteds. While doing my research, I found that there was a book out there about my family genalogy, The True Genealogy of the Dunnel and Dwinnell Family of New England… by Henry Gale Dunnel, written in 1862. (I also want to mention that Internet Archive is amazing). In his introduction, Henry Gale Dunnel writes that he started his research because of the discrepancies between his father’s last, Dunnel, name and the last names of his uncles, Dwinnell.

Henry finds that his ancestor, who also happens to be my ancestor came to Topsfield, Massachusetts in the 17th century. His name was Michael and his last name varied. You can see on the genealogy that I posted, how many different spellings of his last name there are. There is some more information about Michael that I will talk about in a later post. Michael is my eight-times great-grandfather and when I discovered him, as with most of my discoveries, I was amazed. I knew the name of my eight-times great-grandfather. I knew where he lived and some of what he did. For me, that’s a big deal.

To lay the ground work for the Dwinells side of my family, I made a quick tree:

Mystery Grandpa was my first real snag in researching my family. His name was Andrew J (or H) Dwinells (or Dwinnels) and he is my paternal grandfather’s paternal grandfather or my great-great grandfather. One problem that I encounter frequently is that the spelling of his, and my, last name is often different or transcribed wrong. That sometimes makes it difficult to find the correct information and is confusing, so excuse my spelling if it differs from documents.

From what I know, Andrew J Dwinells was born on August 15, 1846 (The date of this post!). His father was Joseph James Dwinells and his mother was Hannah Maria Kelly. I could not find a record of birth for Andrew, his birthdate comes from marriage and death certificates. The first record I found of Andrew was in the 1850 Federal Census for Haverhill, Massachusetts. 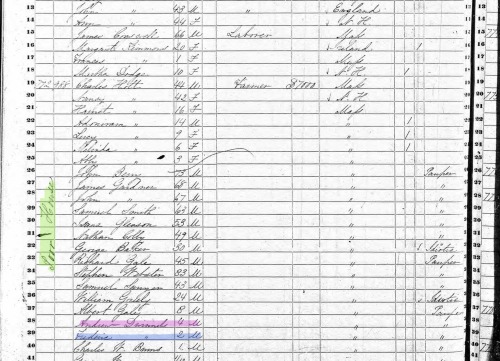 When I first saw this information I was intrigued. I didn’t even know what a poor house was. I also wanted to know why Andrew and his brother were there. I could not find any information about the deaths of Andrew’s parents, thus the beginning of the mystery. There are more mysteries involving Mystery Grandpa, that I will write about later, but recently I came closer to solving this first mystery.

I was reading “The History of Haverhill, Massachusetts: From its First Settlement, in 1640, to the Year 1860” by George Wingate Chase, when I found this paragraph:

In the early part of 1850, the small-pox broke out in the western part of the town, and for a time raged fearfully. It was confined principally to the northern part of the West Parish. In School District No. 2, there were between thirty and forty cases, several of them fatal. The loathsome disease was introduced into the parish by a young lady, on a visit from Boston.

I am at the beginning stages of fully researching this, but my theory now is that Andrew’s parents died in the small pox outbreak, leaving him and his brother orphans. I will have to try to pinpoint where Andrew and his parents would have lived and possibly try to get some records about the outbreak. I know that it is kind of a grim find, but I was excited to get one step closer to solving the mysteries of Mystery Grandpa.